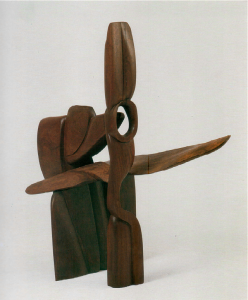 David Kandalkar’s wooden sculptures follow the same intention as his paintings. They depend on tension curves which meet, intersect or even merge into each other. Notches may stop suddenly into another unforeseen direction. Though most of the sculptures emanate calmness and balance, some exist which give an idea of latent aggressiveness – due either to formal details or their overall composition. Saw-toothed structures and sharp edges lend them an air of menace and dangerousness which causes the viewer to «respect» a certain security zone, whereas the «calm» sculptures seem to send out a sheer invitation to touch and feel their surfaces. For David Kandalkar, the «skin», the surface of the wood is of utmost importance, as his intention is to give some life back to the wood or, as he once said, «The wood, though once a living part of a tree, is dead. Nevertheless, in a sculpture it is pulsating with a life force of its own.»

Here we must turn to David Kandalkar’s biography, as his former activities have merged with and come together with his artwork of today. Born in India, he emigrated to Israel at the age of twelve, accompanied by his brother, then aged fourteen. The parents could follow only some years later. In Israel, David attended an agricultural school, and as the school’s director had an eye for special talents of his pupils, David enjoyed support in the fine arts: On the director’s recommendation, he got the chance to show his «paintings» to Marcel Janco, one of the earliest members of Dada. Janco was convinced of the talent of the boy, aged fifteen then, and immediately invited him to participate in a summer academy that usually was attended by elder students only. During the course of the following years, Janco continuously observed David’s work and encouraged and criticised him. Parallel, the pupils of the agricultural school gave theatre performances under the direction of the school director’s wife. Thus they performed more or less the full repertoire of classic theatre, and so, after his military service, David Kandalkar started out as an actor and stage designer at theatres in Israel, until he decided to proceed exclusively as an autodidact painter and sculptor and to emigrate again, this time to London. 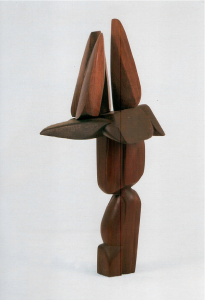 In his further career he profited from the experiences in acting and stage design: acting a role and representing its character means feeling and understanding its inner and outer structure – as well as the materials he now deals with as an artist ask for exploring and respecting their different aspects in a very similar way. It is again a question of attentiveness and precision. Knags and knots in a block of wood, for example, have to be detected fist and then either by-passed or evaded by the form or they must be hidden away by longish and exhausting grinding work and polishing.

Weight and lightness, parts as if pressed together, elements freely swinging out into the space at the sides or trembling in balance high on top of a piece are typical features of his sculptural work in wood; deep lacings sometimes indicate almost brutal creative acts, because he works his raw material with force as well as with affection, no matter if it is the wood of a domestic pear-tree or exotic mahogany. These features likewise convey an inherent, nearly anthropologic principle of vegetative, organic growth. This idea of natural development is generally present in his wooden works. 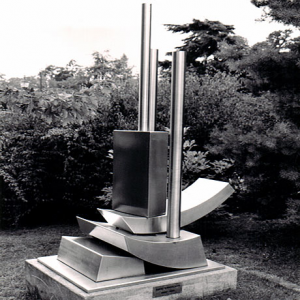 However, we find other sculptures in metal. Although, at first sight, they seem to perform aspects of weight and lightness like those in wood, they are quite different in their composition which is based on mathematical and geometrical elements. One part here seems as if broken out of another, a circle is juxtaposed to an upward striving vertical, a triangle introduces the diagonal spacial process in the wood sculptures, where the artist seemingly listens to form proposals inherent in the material, the working in metal is marked by the artist’s forceful and precise will defining the forms and their combinations treated carefully, in respect of the sparse possibilities of fixing parts together. It can only either be screwed, glued or joined by wood plugs. The several members of a piece are not hidden away but, on the contrary, stressed by the veining of the wood which, in each part, develops a different direction. On the other hand again with metal, David Kandalkar appreciates its flexibility and the range of cast, forged, welded etc. But above all the estimates the seamless welding which makes all single parts merge into one complete, overall form. Both – the sparsely flexible and bristle wood as well as the highly flexible metal that can take different states of aggregation – are worked in regard of their character. One needs care, the other easily endures strong forces. David Kandalkar has not covered their polarity and integrated it as a central aspect of his artistic ideas. His complete sculptural work which is untouched by styles or trends, testifies to more than only his striving for but also his finding of an independent and very personal artistic expression.